In 1998, at the age of 20, I should have been proud of myself. My parents had kicked me out of the house the previous year, but I had succeeded, despite the odds, to get myself off the streets and away from bad people, rent an apartment, find a job, a boyfriend, and start college. And I had done it all on my own.

Instead I felt lousy. Really really lousy.  I had no strength for anything. My memory didn’t work properly and my sight tended to “jump”. I got out of breath from the smallest effort, and I just couldn’t concentrate on anything.

My body had changed too. I had gone from being skinny to overweight very quickly. I went on a strict diet, practically starving myself and exercised for hours almost every day. But nothing I did seemed to help, and the weight crept up higher.

Apart from the excess weight, I also had a red face, buffalo hump, frequent urine, facial hair as well as bright purple stretch marks all over my body.  I would sweat all of the time. I didn’t recognize my face in the mirror. I didn’t even recognize my own smell.

I realized I was dying.

My close friend at the time, Rena, said she had looked up my symptoms and decided I had Cushing’s. She read out loud from the encyclopedia all about Cushing’s and we both laughed. It seemed absurd; Cushing’s sounded like a fatal disease, and I hadn’t yet realized I was ill.

I had many medical problems, but never realized they were all connected.  No doctor I went to seemed to realize that either.

Over a year later I finally went to see an endocrinologist. I was given a long list of medical tests to do. My brain was fuzzy and it was hard for me to remember all the instructions properly.

I was in and out of the hospital. I stopped going to college and work.  The diagnosis was Cushing’s disease, which is a rare and life-threatening disease, caused by a tumor which releases lethal quantities of a hormone called cortisol into the body.

The proper diagnosis took months, in which time the symptoms became much worse. My whole body ached. People wanted to hug me but I couldn’t take the pain it caused. There were days I didn’t really eat because it was too much effort to prepare or buy food. Showering was hard. I couldn’t reach my feet anymore.  I couldn’t sleep, but I couldn’t stay fully awake either. I was in a perpetual state of confusion.

There was only one surgeon in the whole country that performed endoscopic transsphenoidal surgery. He tried to extort me and asked for 20 thousand shekels to speed up the queue. (That’s about $5100.) I didn’t have such a sum and refused him the money.

After six months on the waiting list I finally got a date for the surgery. At the age of 22, on the 27th of November 2000, I had surgery to remove the tumor from my pituitary gland. A few days later I was discharged to my empty rented apartment to fend for myself.

My body was no longer producing cortisol, but it is dangerous to go off of steroids cold turkey, so I was given supplements to help me wean off cortisol slowly. The doctors explained that if I wasn’t well, or under stress, I needed to double my dose so that I wouldn’t go into adrenal crisis. I didn’t fully understand what adrenal crisis was, and I was on my own without any family to help me, so I never doubled my doses. I am extremely lucky that I never went into adrenal crisis

Only three weeks post-surgery I returned to work full time. I still wasn’t feeling well, I had constant headaches and nausea but quickly learned to get up and go to work (with a smile!) no matter what. I had no choice because I was out of money. If I didn’t work I would be back on the streets. Because I was never able to properly rest and regain strength, recovery time was extended significantly.

One year after surgery I started college again. I still wasn’t feeling totally better, but I was determined to succeed. This time I managed to finish my college degree.

Two years after surgery I got married, to the same boyfriend who had been with me throughout the whole illness.

It took over two years post-surgery before I stopped taking medicine and started feeling like my old self again. Yearly check-ups became part of the routine.

I had many good years in which I found a stable job and gave birth to two sons.

It took me time to understand that this is a chronic disease, and even though I had surgery, the pituitary gland may start over-producing cortisol again.

Cortisol levels have elevated again over the past few years, and I just have to accept that’s how my body is and learn to live with it. I have better days and worse days. At this point my cortisol levels are higher than they should be, but not high enough to operate on. My endocrinologist and I have decided to just wait and see, hoping they don’t elevate any more. 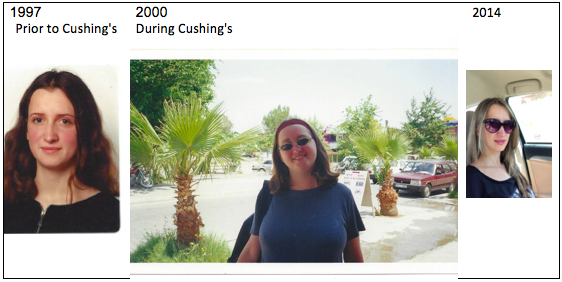