Lupus is a chronic disease in which the immune system of the body makes antibodies (proteins) that attack its own tissues and cells. It is an autoimmune disease which affects many parts of the body like knees, lungs, hips, heart and brain (1).

Also known as systemic lupus erythematosus (SLE), lupus is believed to be caused by multiple factors such as environmental stress and genetic predisposition. The inflammation caused by this chronic disease causes symptoms such as fatigue, arthritis, rash and even kidney failure.

The disease is potentially life threatening and there are many cases where it has caused permanent organ damage. Other people experience just a mild version of it. Researchers and doctors have not yet discovered the cure for it.

Normally, the immune system produces antibodies which protect our bodies from foreign invaders such as viruses, bacteria and fungi. With lupus, the body does not differentiate between its own tissues, cells and foreign invaders.

As a result, it produces antibodies which cause pain, inflammation and damage to various organs of the body. Doctors and researchers have not identified the exact cause of lupus but they can speculate that some factors contribute to it.

There are triggers like stress; toxins, smoking and dust play a role as to why some people get lupus. Infections, drugs and sun exposure might trigger the disease to develop. According to a study published in the journal lupus (2), viral infections may be a contributing factor to the development of lupus. 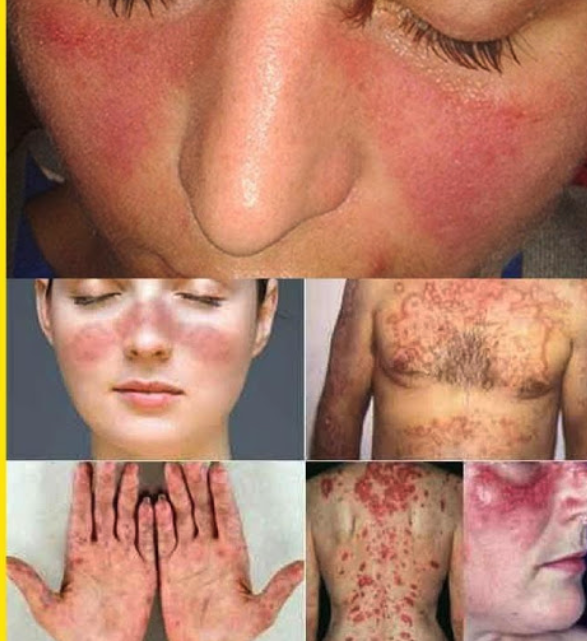 Ultraviolet light has been established to damage the skin which may cause skin cells to produce substances into the bloodstreams triggering the immune system.

Medication is also a contributing factor to the development of this disease. Medications that make people sensitive to sunlight like minocycline, trimethoprim-sulfamethoxazole may trigger lupus to develop.

Being born in a family with members suffering from lupus may put you at a risk of getting it. Experts have noted that having a genetic predisposition may make some people likely to develop lupus. There are some families with members who have autoimmune diseases like rheumatoid arthritis and people from these families are at a higher risk of getting lupus.

There are some suggestions that abnormal hormone levels, such as increase of estrogen levels, could increase the risk of developing lupus.

There has been some study going on to establish the link between infections such as hepatitis C, cytomegalovirus and Epstein-Barr and the cause of lupus.

Signs and Symptoms of Lupus 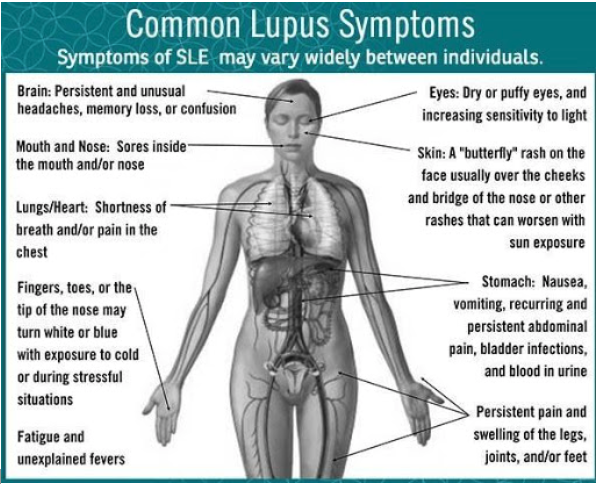 Its common symptoms such as headaches, swelling just to name a few are present in diseases such as diabetes, blood disorders, rheumatoid arthritis, fibromyalgia and thyroid problems.

The symptoms of this disease vary according to the part of the body it has affected. Symptoms can flare up occasionally or be permanent. The most common rash is the butterfly rash on the face. Later serious symptoms of lupus include nephritis; kidney inflammation (3).

The inflammation caused by this chronic disease is enough to cause swelling, stiffness and soreness of the joints. This is most common in the ankles, fingers, hands and ankles. Joint inflammation is so common and joint pain is the first symptom that people suffering from lupus notice and report.

Body temperature of more than 100 degrees Fahrenheit is another symptom of lupus. This is commonly associated with a lupus flare.

At a later stage, the most complications of lupus develop. Symptoms of this condition include swelling of the hands, feet, legs, high blood pressure and sometimes blood in the urine.

Lupus is best managed with medication and lifestyle changes to manage symptoms and prevent its occurrence. Using a variety of therapies and medication will help with symptoms of lupus like mild arthritis, headaches, joint pains and kidney problems.

Since diagnosing lupus can be difficult, doctors have to combine urine and blood tests, physical examination, signs and symptoms in order to determine a diagnosis.

Chest X-ray and Echocardiogram may be done if your doctor suspects that lupus has affected your lungs or heart.

Antimalarial drugs can be prescribed to help decrease the risk of lupus flare because they have an effect on the immune system.

Corticosteroids are given to counter the inflammation of lupus.

Immune suppressants might be given to people with serious cases of lupus. They include azathioprine and mycophenolate mofetil.

It is important to care for your body if you have this chronic disease. Everyday simple measures can be taken to prevent its symptoms such as flares and inflammation.

-It is good to be seeing your doctor regularly in order to give you tips of preventing lupus complications. Your doctor can suggest best diet and exercises.

Avoid direct, hot sunlight. Ultraviolet light can trigger some of the symptoms of lupus like a flare. Wear protective clothing such as long sleeved shirts, hat and long pants and if possible, use sunscreen when you go outside.

Eat a healthy diet such as whole grains, fruits and vegetables especially if you have high blood pressure.

Don’t smoke because it might worsen the effects of lupus.